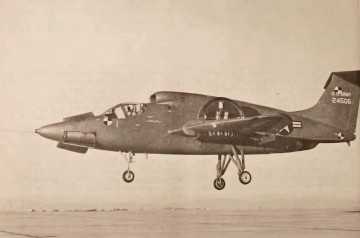 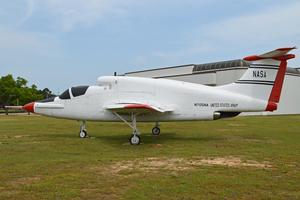 After two years of research, in November 1961, General Electric won a US Army contract to develop its fan-in-wing concept, the XV-5A. Design, construction and flight testing of the aircraft was sub-contracted to Ryan, but GE retained responsibility for the propulsion system and its integration into the aircraft. The XV-5 was 44 ft long with a 30 ft wingspan. In the inboard portion of each wing a 5 ft diameter fan provided vertical lift. A smaller fan in the nose in front of the two person cockpit give pitch control and additional lift. The fans, providing a total vertical thrust of 16,000 lb, were driven by the exhaust gases of two 2,650 lb thrust GE J85-GE-5 turbojets. With a 7,000 lb empty weight, and a 12,200 lb gross weight, the Vertifan had 31% excess power. The wing fans rotated in opposite directions and were covered by hinged doors, while the nose fan was covered by louvers. The wing fans, which differentially affected roll, exhausted into louvered vanes that could vector the thrust fore, aft or laterally, also controlling yaw. A thrust spoiler allowed the engines to throttle to full power before the fans were started. Two aircraft were built; the first one flew from 25 May 1964 until it crashed the following April, killing the pilot during a transition attempt.

First hover was in June 1964, and first transition in November 1964. The second aircraft flew until it crashed in October 1966 (also killing the pilot), but was rebuilt as the XV-5B. This had a wider landing gear, had an improved cockpit, and removed the thrust spoiler. It began flying on 24 June 1968. The drawbacks of the Vertifan were the large volume and weight occupied by the lift system, slow control response, and the narrow transition corridor.

Milestones Associated with the XV-5 Vertifan