This is a Notable Technology milestone.

The first rotorcraft to fly with full fly-by-wire (FBW) controls without a mechanical backup was the Boeing-Vertol 347. The aircraft’s “Direct-Electrical-Linkage System (DELS)” replaced the conventional hydraulically-boosted mechanical controls. The DELS flight test program was conducted in three phases: open loop with mechanical and FBW controls; closed-loop; and pure FBW with the mechanical flight controls disconnected aft of the cockpit and at the swashplate actuators. This testing, the world’s first demonstration of FBW controls, was in support of the much larger XCH-62 Heavy Lift Helicopter (HLH) development program. FBW testing was concluded on October 30, 1974. 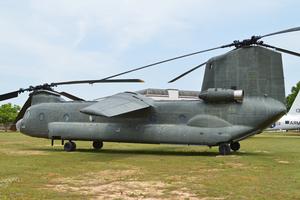