Kevin Bredenbeck received the American Helicopter Society Feinberg Award in 2011 for piloting the Sikorsky X2 high-speed demonstrator. As part of the small rapid-prototyping team, he took the coaxial compound helicopter to 253 kt in level flight and proved technologies scaled-up to fly next in the company-funded S-97 Raider this year and again in the Army-led Joint Multi-Role (JMR) technology demonstration in 2017. “What’s really surprising is we thought we’d do X2 and have it sit on the shelf for 10 or 15 years before someone did something with it,” acknowledges Mr. Bredenbeck. “Here, in less than 10 years, a pilot sees a concept mature to where we’re potentially going to change the way the helicopter will be designed in the future – pinch me.”

As an experimental test, combat Medevac, and private pilot, Kevin Bredenbeck has flown some 35 rotary-wing and 24 fixed-wing aircraft. “First and foremost I am a Black Hawk fan, but fixed-wing-wise, my favorite was a plane I owned, a Long-EZ. I got the Long-EZ prior to doing X2 just to get used to an aft-thrust aircraft and some of its pitch inconsistencies. From an engineering perspective, it was an awesome airplane, but from an enjoyment perspective, it was just phenomenal.”

As Chief Pilot, Director of Test, and Director of Flight Operations, Mr. Brendebeck oversaw safe test programs for the commercial S-92 and S-76D, fly-by-wire H-92 and UH-60MU, international S-70i, and other Sikorsky aircraft. Now a Technical Fellow, he steers the development of advanced platforms including the Defiant JMR demonstrator. “A few of us who were in leadership positions running big organizations were weaned down and allowed to focus directly on the technical aspects of the future of the company. What a great opportunity to be a Tech Fellow and focus on the things I’m just passionate about.”

Flying Engineer
Kevin Bredenbeck found his passion for aviation growing up in Springfield, Massachusetts near Westover Air Force Base. His father, Lloyd Bredenbeck, was a manufacturing engineer and an Air Force veteran. “Every air show when the Thunderbirds flew F-100s, whether from Windsor Locks up the road or at Westover Air Force Base, we were walking around and touching everything from B-58 Hustlers to F-86s. I just couldn’t get enough of that.” Abandoned Springfield Airport about a half mile from his home once launched record-setting Gee-Bee racers, and Mr. Bredenbeck remembers, “It was not an airport any longer, just an overgrown field, but the old hangar was there. They had a pylon mount they used to use for doing time trials back and forth from Agawam to Springfield and South Hadley.  I was curious about that. I would do more research on the Granville brothers and the Gee-Bee.”

The space program provided timely inspiration.  Mr. Bredenbeck recalls, “Every time there was a space launch, my father and I were just glued to the TV,” Springfield Technical High School offered a Junior Reserve Officer Training Corps program, and the Civil Air Patrol fed the fascination with flying and drove higher education choices. “I was just trying to look for a college that would get me close to being an astronaut. I had it boiled down to University of Michigan, Purdue, and Embry Riddle as a total, dedicated aviation school – that’s where I ended up going.”

The well-rounded aviation curriculum offered more choices. “I loved electronics, so I went to aeronautical studies engineering with a minor in avionics. That way, I took propulsion classes; I took navigation classes; the associated math and physics classes.” Mr. Bredenbeck recalls, “At night, I would go to work in the avionics shop, repairing Embry Riddle aircraft.”

Though the curriculum at the time offered no rotary-wing content, Kevin Bredenbeck earned his fixed-wing pilot’s license and logged a little helicopter time. “I would fly on the side because that was my passion. While I attended college, I was in the Coast Guard Reserve. My intent, once I graduated from college, was to go to Pensacola to be a Coast Guard pilot. When I graduated, they were taking only Academy grads that year.” The Marines promised an F-18 training slot on graduation, but, “The day I was supposed to go sign the paperwork to go to Pensacola, the phone rang, and it was Kennedy Space Center, United Space Boosters Inc. offering me an engineering job. I was there two-and-a-half years and got to work on the interface between the Space Shuttle Orbiter and the solid rocket boosters.”

When USBI lost its Shuttle launch contract, the young United Technologies Corp. engineer faced new choices. Kevin Bredenbeck recalls his supervisor and Hamilton Standard alumnus Ed Glisson told him, “Kevin, if you want to be a test pilot, you need to get out of here. I have connections at Sikorsky.”

Three weeks later, the helicopter maker assigned Kevin Bredenbeck to a hangar team looking at avionics removals in flight test. “I did that for a year. It was evident I was frustrated and needed to be a test pilot. I went to the Navy and the Army and filled out the paperwork. The Navy called and said I had a Pensacola date. It was already too late -- I was in basic flight school with the Army in the push-up position.”

The Army recognized the new pilot had Black Hawk technical experience from Sikorsky, and pending a UH-60 transition class put him to work as an engineer in what was the Fort Rucker Test Division. The assignment provided co-pilot transitions on various aircraft and test flights in Cobras, Apaches, Chinooks, and Black Hawks. “I finally got through the Black Hawk transition and transferred to the Medical Service Corps because they needed people like myself, and I really liked the Dust-Off mission.”

A tour in Korea and subsequent maintenance test pilot qualification led up to Operation Desert Shield/Storm. “After flying combat Medevac missions with no escorts deep into Iraq, doing extractions, and working with Special Ops, I knew the Black Hawk was a great airplane, but I knew if I could get to Sikorsky I was going to be one of the people to bring a fully coupled four-axis autopilot to a modernized Medevac helicopter.”

Kevin Bredenbeck left active duty in 1992, but a full-time National Guard job in Connecticut refurbishing Black Hawks re-acquainted him with Sikorsky pilots. “I got a phone call from Nick Lappos asking ‘when are you going to work for a living and come to Sikorsky?’ They could have offered me minimum wage at the time, and I would have taken the job. They sent me to National Test Pilot School out in Mojave for six months to do the year course.”

Sikorsky put Kevin Bredenbeck back in the Black Hawk. “Here comes the dream come true – go out and make a Medevac aircraft that’s going to help you out in combat -- the UH-60Q, which was a modified A-Model with better equipment. Then, I got to work on the fully coupled Brunei Black Hawk and then slowly progress to the UH-60M.” The US Army’s newly digitized utility helicopter spun off today’s HH-60M. “The fully-coupled Black Hawk stepped into the Medevac mission.”

ABC Again
The Sikorsky test pilot meanwhile kept a picture of the XH-59/Advancing Blade Concept (ABC) on his cubicle wall. “I used to tell John Dixon, our Chief Pilot, if we ever do an aircraft like that, I want to fly it. That’s when he put me with Steve Weiner and the group that contrived the X2.” Refined ABC technologies such as compound airfoils and an integrated propulsor posed no excessive challenges. “We looked at the reports from the ABC. I had the opportunity to interview the pilots who flew it. We brought in the Gray Beards – a few of the gentlemen who were actually on the ABC team.  Looking at what they did, the math and physics were pretty much proven. Probably the biggest challenges were the drag and the vibration.”  Mr. Bredenbeck notes, “We surprised ourselves on the drag numbers, and that actually allowed us to adjust our model. We’re using that for Raider and for JMR.”

Significantly, the X2 program effectively concentrated authority in five or six leaders who made quick decisions to achieve Key Performance Parameters. “Think of it, here’s a company in this day and age that just sequestered this small team and empowered it and said, ‘Don’t deviate from safe processes and risk the company name, but go do what you think it is best to do.’” Mr. Bredenbeck observes, ”I think we were stagnant for just so many years at Sikorsky – I think the Industry was – it just opened the eyes of everybody out there and started having them innovate again.  I think that’s the best part of X2. I think it got Sikorsky really back and focused on its core values, what’s really important, and just set the stage for the future.”

Kevin Bredenbeck was the X2 project pilot and is now project co-pilot for the S-97 Raider. “The main thing this aircraft is meant to do is maneuver unlike any other helicopter. We already know it goes fast; now we’ve got to get that maneuver envelope. There’s nothing better than to be able to hover an aircraft without a lot of disk loading to make rescues, to go into urban areas, to do any mission.  When you look at X2, the ability to disengage the prop and lower the rotor speed to reduce the acoustic signature of the helicopter makes it a much more friendly helicopter in the base environment and much more of a tool that expands the speed regime.”

Like X2, Raider relies on a small team, and Kevin Bredenbeck says, “Programmatics have been a detriment to a lot of programs. When you look at Comanche – there’s a perfect one – what an awesome airplane; and I’m not just saying that because I worked at Sikorsky as a young engineer and test pilot who got to see what that aircraft could do. What got in the way was programmatics and a Mission Equipment Package. On X2, we said we were going to deliver a platform. On Raider, we are going to deliver a platform and let people see what the difference is. Then we’ll worry about the Mission Equipment Package and open it up to the programs type of stuff.”

Mr. Bredenbeck already flies the Raider and Defiant in simulators and observes, “The helicopter pilot is the last dinosaur in aviation.  He sits hunched over, hanging onto two sticks, just like when the helicopter first started flying back in 1939. We’re trying to get them back in an inclined position, relaxed, to do longer missions and interface with systems and not be plagued with just trying to fly the aircraft 100% of the time. The aircraft should be helping him do that while you’re doing other things."

“We always struggle with the avionics suite and the human interface aspects of that.  We have some working concepts at Sikorsky. Maybe the helicopter doesn’t need a collective. Maybe it doesn’t need a cyclic.  Maybe you can do this better with one controller or one collective or a multi-purpose controller.”

As an AHS member and representative to the Future Vertical Lift consortium, Kevin Bredenbeck values opportunities to share such insights. “I think the AHS interface, when you look at the technical publications, pushes us as an industry.  I really think it links us into seeing what the other OEMs are doing or what universities are doing. It makes us question what we’re doing, which I think is terrific. An organization like AHS is our open forum for engineering and helps promote what we do. If you don’t advertise it and show the benefits of it, how do you get kids to be passionate about the things we’re doing?” 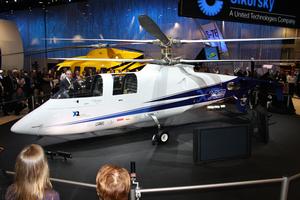