Born on March 27, 1918, in Johnson City, New York, LaVassar was trained to be a pilot with the Civilian Pilot Training Program in 1938, after working at International Business Machines (IBM). He joined Pan American as a pilot, transporting military equipment to Africa, but left to join the Navy in 1942, hoping to see combat during World War II; he was such a skilled pilot that he was sent to serve as a flight instructor in Indiana. After the war, he was hired by Bell Laboratories and sent to Argentina, where he and several colleagues trained Juan D. Perón’s pilots to fly helicopters, among other tasks.

In 1950, LaVassar joined Piasecki, which eventually became Boeing Vertol, leading a team of more than 100 as Director of Test Flight. LaVassar had a record 11 first flights on a variety of aircraft, including the Piasecki HUP-2, H-25A Air Mule, HUP-4 and YH-21 Workhorse, and the Boeing Vertol 107 Prototype, YHC-1, BV 107-II, YCH-1B and Model 347 winged Chinook in 1970. He was also the initial test pilot for the Vertol VZ-2 demonstrator, making the world’s first complete transition of a tiltwing/ tiltprop on July 15, 1958. He also served as a product development advisor to the emerging aircraft companies in Germany and Italy, and demonstrated the Bölkow Bo 105 during the partnership with Boeing. In 1977, LaVassar became an aviation advisor to the vice president of Boeing Vertol, where he advised on strategy and development plans for Boeing products. He retired from Boeing in 1983, after 33 years, but continued consulting.

LaVassar joined AHS in 1953 and was an occasional contributor to Vertiflite. He became a member of the Gold Circle Club (25 years) and an Emeritus Member of AHS (50 years). He was an Associate Fellow of the Society of Experimental Test Pilots, and in 2000, LaVassar received the Les Morris Award from the Twirly Birds for his contributions to the helicopter community. 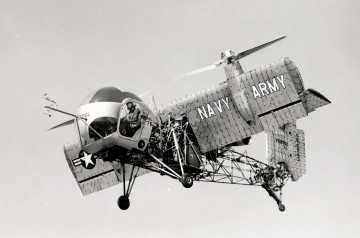