Paul Cornu was a French bicycle maker and pioneer in vertical flight who, in 1907, built the first helicopter prototypes to ever carry a human off the ground. In 1906,  Cornu was well ahead of others who were attempting to build piloted helicopter concepts about that time.

Paul Cornu was born in Glos-la Ferriere, France on June 15, 1881, and his family moved to Lisieux, France where his father owned a Bicycle, and automobile shop. From an early age, Paul was a good mechanic and engineer. As a young man of 14, he invented and patented a variety of things such as a rotary engine, a temperature controller for an incubator, and an automobile with 2 engines but no gearbox. At age 24 he built his first helicopter, which was unmanned, but which flew successfully. When Ernest Archdeacon, a wealthy lawyer started an aviation competition to build a flying machine that could travel a full kilometer, Cornu was quick to join.

In the development of his machine, Cornu built a force balance for his rotor tests and was one of the first to conduct systematic experiments to study the thrust and power requirements for vertical flight. Cornu’s free-flying test rig – a model weighing up to 18 kg (40 lb) lifted by a 24 hp engine driving two contrarotating rotors – was to make several sustained flights, in both hover and forward flight, and with many witnesses to the event. The flight-worthiness of his test rig can also be verified through engineering calculations. Of some further significance, is that Paul Cornu was also looking at methods of achieving flight control and forward propulsion at a time (1906) when others were thinking only of ways to get vertically off the ground. Cornu patented his design, and it is registered as US Patent 902,859, filed on September 11, 1906.

He patented his design under U.S. Patent #902,859, and it was filed on September 11, 1906, and issued on November 3, 1908. The control surfaces, which were two “wings” with adjustable pitch that were placed in the slipstream flow below the rotors, were then added and the machine configured for its first piloted flight; but it did not take off because of drive belt slippage, a problem that would plague Cornu throughout all of his attempts at flight.

On 6 December 1907, Paul Cornu reported “The aircraft left the ground with all four wheels altogether” which suggests that Cornu’s machine made a brief piloted hop on that day. There is no evidence that he left ground effect, though some claim that he flew up to 2 meters and stayed airborne for 20 minutes. Engineering calculations, as was done for Cornu’s test rig, confirm that free flight, clear of ground effect, would have been impossible using an engine that produced, at most, 24 hp. In fact, an engine closer to 40 hp would have been necessary to lift his machine, even under the best of circumstances. Due to the problem with his design, and the novelty of the rotary wing concept, Cornu did not win the Archdeacon competition and he ceased to work on flying machines.

Paul Cornu was killed in his hometown of Lisieux during an allied bombing raid on the Nazi-occupied town in 1944. Although he only succeeded in flying for a short while, there is great significance in Cornu’s work which lies more in his systematic and scientific attempts to understand the relationship between rotor thrust and power requirements, and in exploring methods of controlling a helicopter in flight and in its forward propulsion.

Normandy Then and Now, (2017, July 19). Incredible Corny, the helicopter cyclist from Lisieux. Retrieved June 19, 2019, from https://www.normandythenandnow.com/incredible-cornu-the-helicopter-cyclist-from-lisieux/ 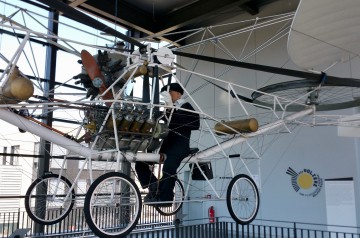