Commissioned Dec. 1, 1947, HMX-1 ("Nighthawks") is a United States Marine Corps helicopter squadron perhaps best known for being responsible for helicopter transportation of the President of the United States (as well as other VIPs). HMX-1 is headquartered at Marine Corps Air Facility Quantico and maintains detachments at Joint Base Anacostia–Bolling in Washington, D.C.and Joint Base Andrews Naval Air Facility in Maryland.

The squadron originally operated the Sikorsky HO3S-1 and Piasecki HRP-1 and first tested its capabilities when five squadron aircraft transported 66 Marines from the deck of the USS Palau (CVE-122) to Marine Corps Base Camp Lejeune.

The "X" in its squadron designator originally stood for Experimental, emblematic of its original mission of testing new helicopters and flight systems. However, as its operational role in VIP transportation overshadowed its operational test and evaluation role, the "Experimental" moniker was dropped, although the squadron designator was left unchanged. 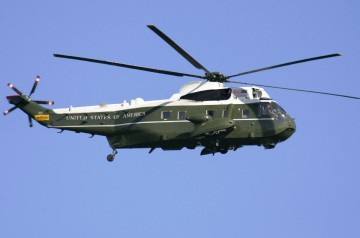